Authors usually do these year-end review things in December … but I’m including my plan for 2018, so January seems a better fit.

2017 was a decent year for me. I published Privateer and Spacer (in the Orphans in the Black anthology) and finally, after years of trying, settled into a really productive writing regime that’s starting to pay off bigly.

Spacer is an expansion of Wronged, which you can get for free signing up for my mailing list, and is the start of another series set in the Alexis Carew universe, called Spacer, Smuggler, Pirate, Spy. Those being the quartet of books planned for the story.

From the actual writing standpoint, though, 2017, at least the first half, was less than I’d hoped for. I went into with the intention, the desire, the plan, to write every day and average 1000 words a day. I didn’t get there at all. In fact, the first quarter wasn’t worth squat. 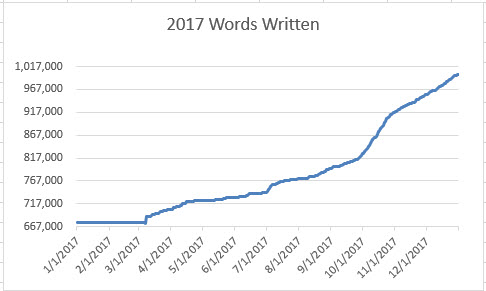 There are a lot of excuses that can be made when an author isn’t writing, but that first quarter lull can be ticked off to laziness and lack of good habits. In 2016 I’d established a good/bad habit of writing really well on vacations — the time away from home got things flowing well — but that leaves all those days at home to not trigger the writing flow.

I got back to it because I had to — I’d committed Spacer to the anthology and didn’t want to let the organizer down. Especially since it was the first anthology I’d been invited to. Reputations and all that.

So I got Spacer done and started writing more, but those big upticks in word count through May were still mostly time off. I do get a lot of vacation time from my day job, eight weeks because I’ve been here twenty years.

Something else happened, though, which led to finishing the year strong.

I would typically get up early and go into work equally early, allowing me to leave in the early afternoon. (I am not a night-guy.) But we had a policy change that said I had to be in the office from 9-5. This left 7ish to 9ish, my most productive, alert hours, idle.

So instead of dedicating that production to the day-job, I firmly established a writing zone upstairs in my loft (instead of on the couch where the TV is so tempting) and went up there every morning. Well, not every morning at the start, but enough that the habit started getting more and more established and it trained my brain that when we are in this place at this time it is the thing to do to write words.

The last quarter of the year, October to December, saw some of the most productive writing I’ve ever had. I wrote 96,000 words in one 30-day period during this time, and 5500 in one day.

I finished Of Dubious Intent, which will release in March, finished what will be either the first in a new series or the first three — depending on how it’s released — and got started on Alexis Carew #6, still untitled.

Leaving the Carew series (except for plotting) for a couple months and not moving right into #6 was a good decision too. It let me get the stories for Of Dubious Intent and the other series out of my head — they’ve been sitting there, half-finished or never started, for years, with the nagging doubt that I’d ever get to finish them. Now I’m heading into AC#6 with fresh eyes, a sense of accomplishment, and a real desire to continue Alexis’ story as well as the others.

In 2017 I only managed to write on 174 days, but wrote over 300k words on those days. I also passed 1-million words written, between the books, shorts, essays, and to-be-published works since I started writing with the intent to sell in 2013. That’s a significant milestone and I’m glad I hit it — coincidentally right on December 31st. 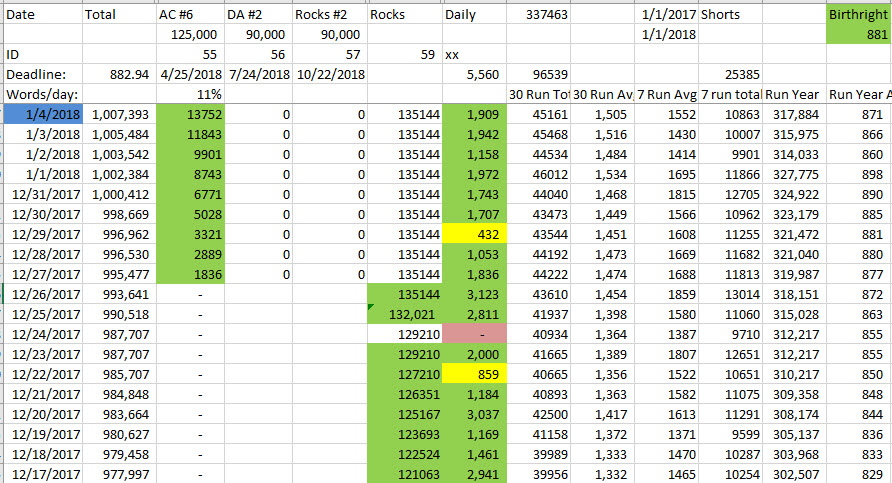 That’s my daily writing spreadsheet, and tracks daily progress, as well as goals and projected completion dates, plus metrics because I’m a data geek.

So as of today, if we look in the column headed AC#6, that’s the next Carew book and I’ve competed nearly 14000 words, or 11% of the expected 125k word length. It maybe longer or shorter than that, and I’ll adjust the expected length as I get closer to finishing and can project it better, but both Nightingale and Privateer were in the 125k range.

There’s also a date in that column of 4/25/18 — that’s not so much a deadline as a projected completion date. Meaning if I average 1000 words a day, every day, then I’ll hit the target length on that date.

That’s a words-complete date, not a release date, so don’t get excited.

After that comes editing, so about a month of me reading through it more than once in the afternoons and tweaking things, which is when it will go up for preorder, then my fiance will do her edits (another month) then my main editor (two weeks) and then I will give the edited manuscript to Elizabeth for narration (another month) and then we’ll have a release.

The two columns Rocks and Rocks#2 are the new series that doesn’t have a name yet, and DA #2 is the sequel to Of Dubious Intent — all of which are looking to be words-complete this year, even if the next bit of that “Rocks” series won’t release until 2019.

On a slightly different note, being the financial side of things, I’ve long had a goal of quitting the day job and writing full time. In 2018 I’ve purchased a house and will be moving in come April, then after that I hope to live off the book income with the exception of health insurance and the mortgage. Both of those will come out of the day job paycheck, with the remainder of that paycheck being split between savings and paying off the mortgage faster.

The purpose of this plan is to pay off the house quickly, thus reducing monthly expenses and making it easier to live full-time off the book income for everything. Once I can do that, and write full-time, productivity should be even better — and I’m really looking forward to that.

I know there are some Carew readers who’d prefer to have Carew after Carew after Carew releases, but the diversity of series both lets me write Carew better and will pick up new readers — which translates into full-time writing sooner, which brings more of all the series quicker. It’s a positive feedback loop. 🙂

I’m also going to try to post more on this blog, especially about the progress — both so my readers can follow what’s going on and hold me accountable. If I put out a words-written graph with another big flatline and no explanation, feel free to email nags at me until I get back on track. 😀