A Weekend in the Garden of Good and Evil 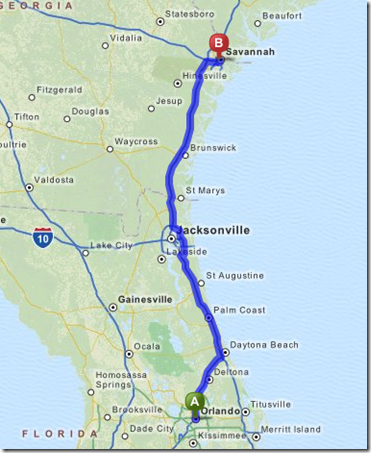 Between the data on biddingfortravel.com and the Priceline Express deals for these dates, I determined there was little chance for a nice hotel on the river for what I’d be willing to pay.  The Savannah Music Festival was running on weekends this month and the weather was beautiful, so a lot of people would be headed there.

But the zones I was adding were on the river and in the city – so I’d still be pretty happy to get something for that price, even for a few dollars too much.

Thursday was a travel day – I left work a little early for the 4.5-hour drive to Savannah.  After checking into the hotel, I checked Urbanspoon and Google Maps for BBQ places and wound up at Shane’s Rib Shack. 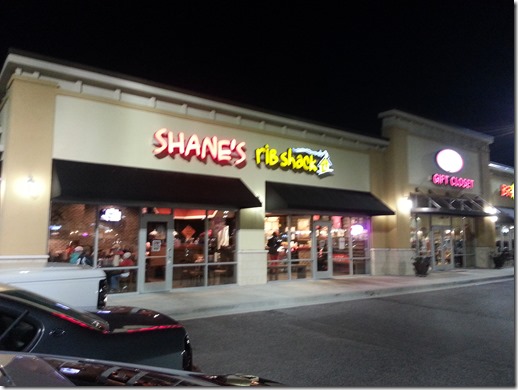 This is clearly a new location in a brand new shopping center and employees were still being instructed on how to use the register and take orders when I arrived for dinner.

I got the combo platter with ribs and chopped chicken (apparently they’ve had some confusion about the chicken, because they were adamant I understand the chicken was chopped and “was I okay with that”).  I picked baked beans and macaroni and cheese as my two sides, and the platter, somewhat inexplicably, also comes with two chicken fingers. 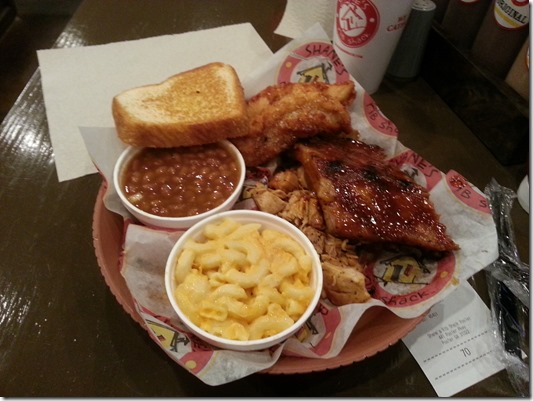 My receipt indicated a $0.25 upcharge for the mac-n-cheese, something I didn’t see on the menu board.

So my first impression of the food was that everything except the chicken fingers was cold – not just lukewarm, but cold.  The chicken fingers were hot, though, which leads me to believe that the kitchen dropped them in the fryer, then dished everything else up and let it sit until they were ready.  This is something they should address, because there’s really no reason for BBQ to be served cold.

The chicken fingers, aside from being hot, were also pretty good.  Still not entirely sure why they were compulsory on my combo platter, though, and not something I’m particularly interested in at a BBQ restaurant.  If I’d been after chicken fingers, I’d have just gone to the Zaxby’s next door and gotten better for less money.

The macaroni and cheese, looking past the temperature, was pretty good, with a strong cheese flavor.  The beans, on the other hand, were nothing I couldn’t get out of a can … and an unheated can, at that, so … ew.

The ribs were good, even at room temperature.  They were tender and meaty, with a sweet, sticky glaze that I wish had been represented in the selection of sauces on the table. 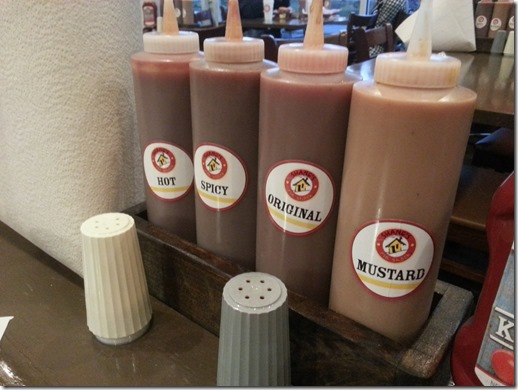 Saving the worst for last, the chicken was cold and dry.  Now, keep in mind that I like dry chicken – more than being okay with it, I actually do like it.  But this was too dry even for me.  Maybe if it hadn’t been cold, too. 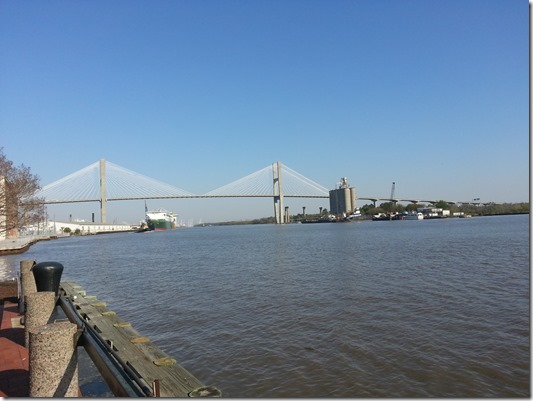 It’s a twenty-minute drive from the airport hotels to the Savannah riverfront.  I arrived early enough that there was no trouble parking in the lots on River Street and spent some time enjoying the area before the crowds arrived, then headed for Huey’s on the River for breakfast. 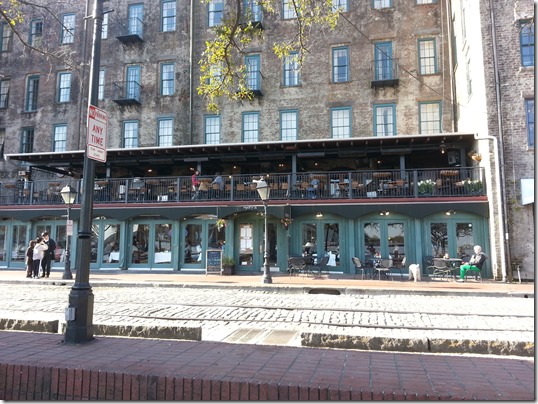 Huey’s has several Eggs Benedict variations, and I almost went for the crab cake one, but decided on tomato, with the parmesan garlic grits recommended by the server. 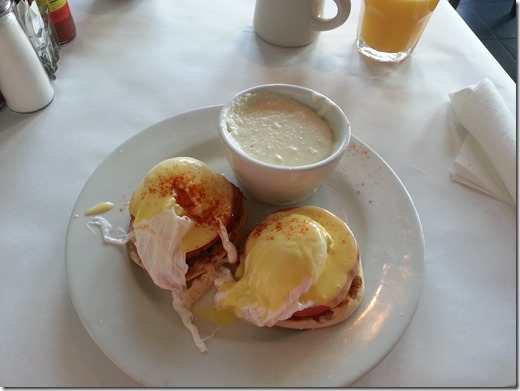 That recommendation was good, as were the grits.  I would have preferred a bit more more Hollandaise, as the end result after cutting into the eggs was a little yokey, but overall they were quite good.  The tomato added a nice bite of acid to each bite that cut the richness of the sauce and yolk.  And the dash of cayenne on top finished each bite with a kick. 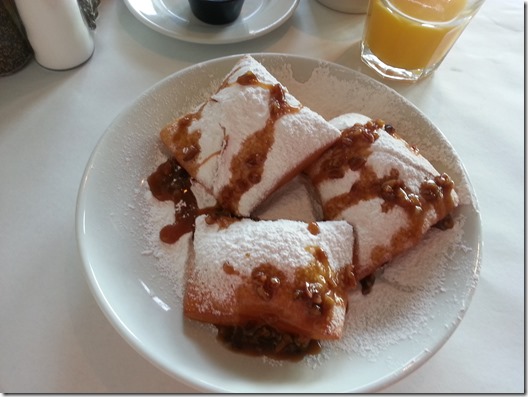 I also got an order of their beignets with praline sauce.  These would make a breakfast by themselves and should really be shared … I didn’t share.

I was back at Huey’s for breakfast Saturday, described below.

Savannah is still a working port, in fact one of the busiest ports in the US. 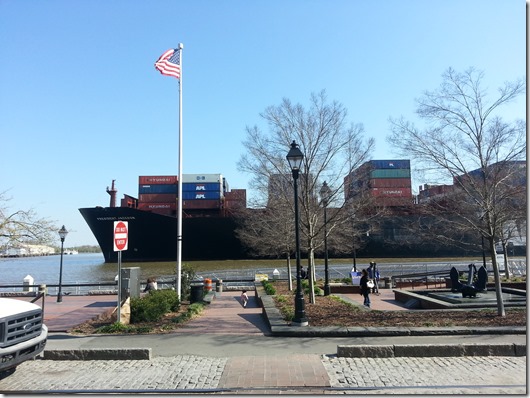 I spent the morning browsing the shops and listening to the buskers who’d arrived early to claim a spot on the riverwalk.  At the end of the riverwalk I climbed the stairs up to Bay Street. 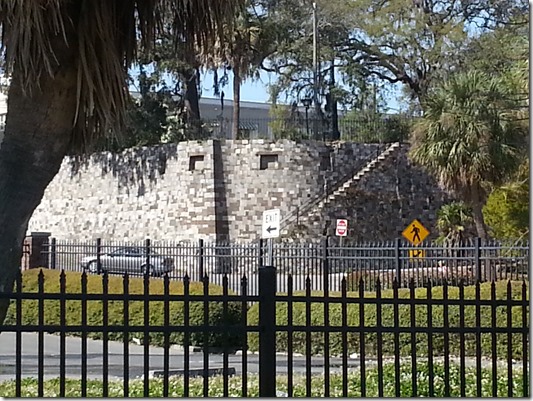 Bay Street has a different character than River Street.  The riverwalk is all restaurants, bars, and tourist shops.  Bay Street has a more gentile feel, with moss-covered trees and flowers. 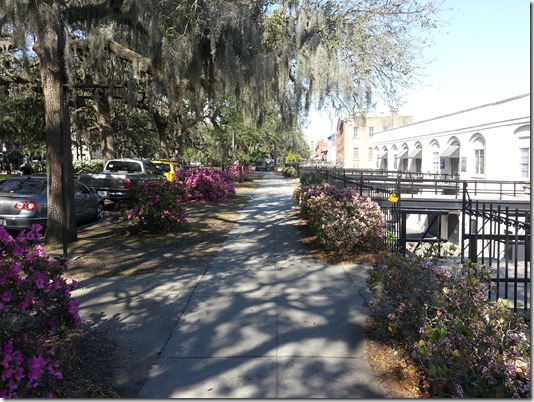 The two streets share a row of two-story buildings, with the second floor fronting on Bay Street running along the river bluff and connected by bridges that span the Factor’s Walk below. 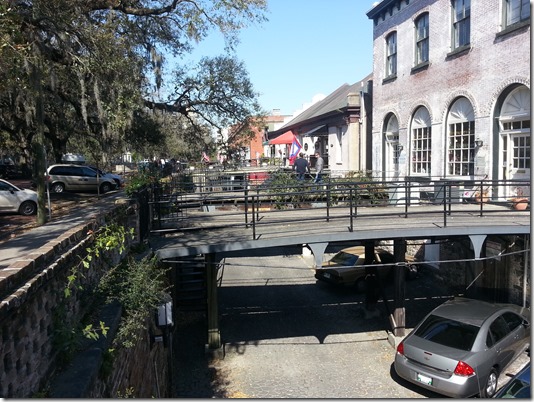 Bay Street has the antique shops and galleries.  After a morning of browsing things that I really, really like and really, really can’t afford, I headed for the Georgia Railroad Museum a few miles away. 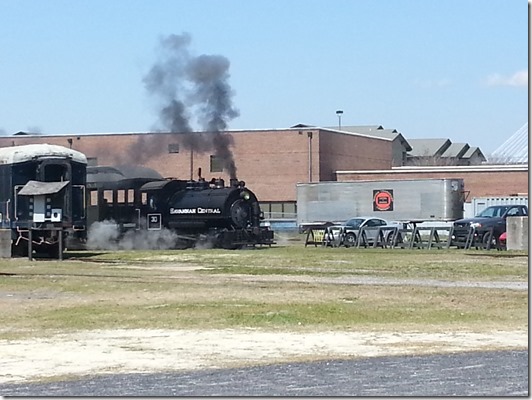 It’s fascinating to see not only the trains and cars, but a working roundhouse and turntable, as well as the blacksmith and mechanics shops that went into keeping a steam railroad running.  All powered from a central steam engine by either piping steam to the work area or a spinning driveshaft and belts. 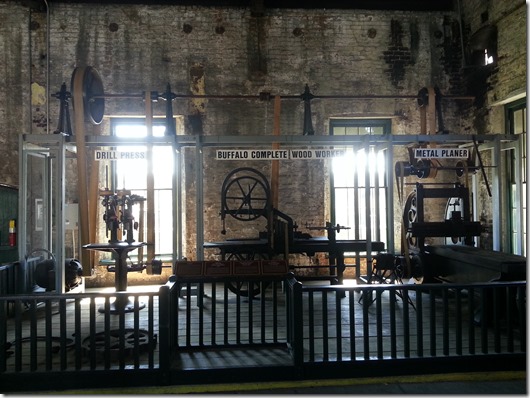 After the Railroad Museum, I headed for Old Fort Jackson.  I learned that the Army Corps of Engineers will be deepening and widening the Savannah River channel to accommodate supertankers, and part of that entails raising the CSS Georgia ironclad from the Civil War.

Once raised and restored, the US Navy gets to decide which museum would get the artifacts, as the Georgia is still classified as a captured enemy vessel.  My opinion is that there should be no question that the Georgia should be part of the Fort Jackson exhibits, as she belongs with the other sites that defended the Savannah River. 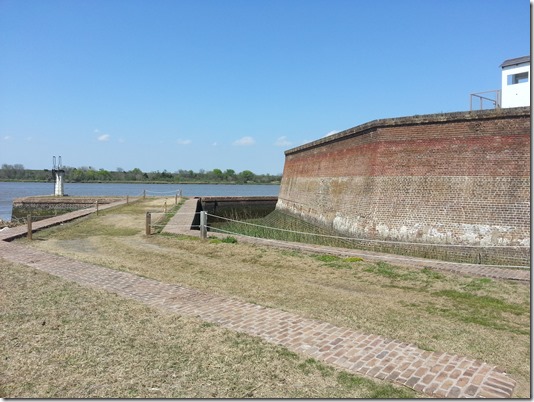 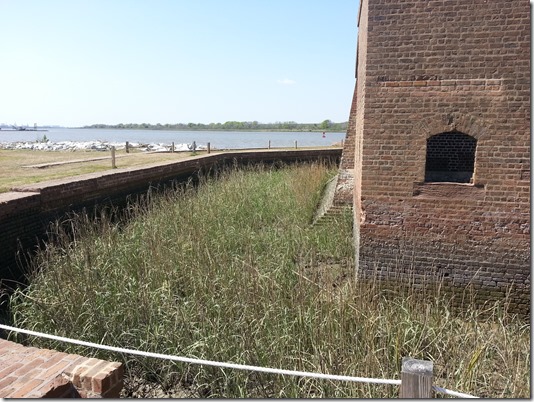 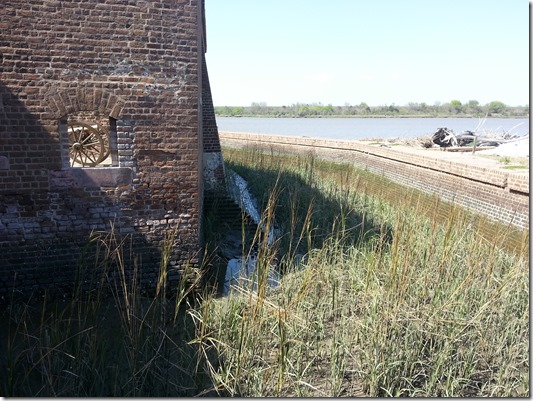 Tried a panorama shot of the river from the fort’s rampart.

For dinner I tried for BBQ again, hoping to find something better than Shane’s.  Smokin’ Pig came up, but Google Maps navigation said I’d arrived at my destination with no BBQ place in site.  I pulled into the first parking lot to check the address and see what had happened. 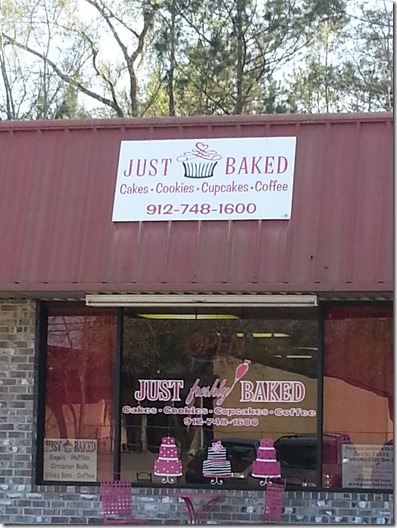 Well … since I was already in the parking lot …

Look, my rule is that if the Universe drops a perfectly good cupcake place in front of you, it’s rude not to get cupcakes.  So I did. 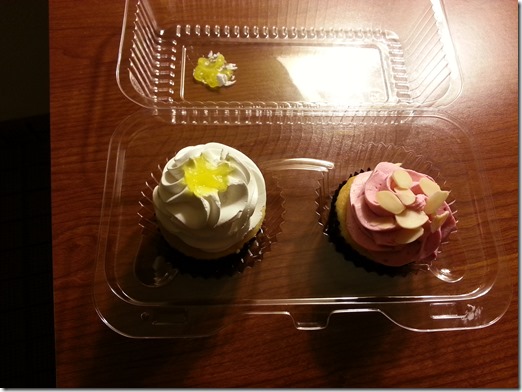 Raspberry-almond and lemon-crème, which I had for desert Friday and Saturday.  I also got directions to the Smokin’ Pig. 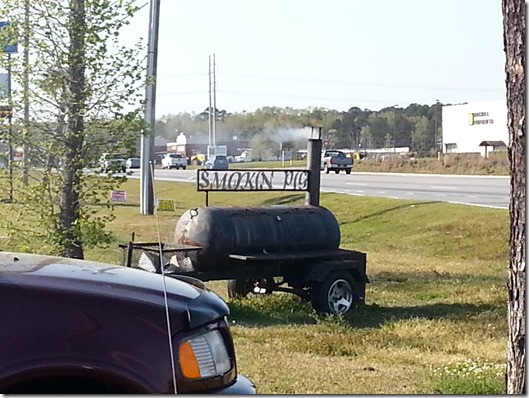 I’m not sure if they actually cook in their sign, but it does get attention.  And as I walked through the door to come face-to-face with a shelf full of pig-shaped trophies, I figured I’d finally get some good BBQ.

I got the combo platter with ribs, brisket, Brunswick stew, and potato salad. 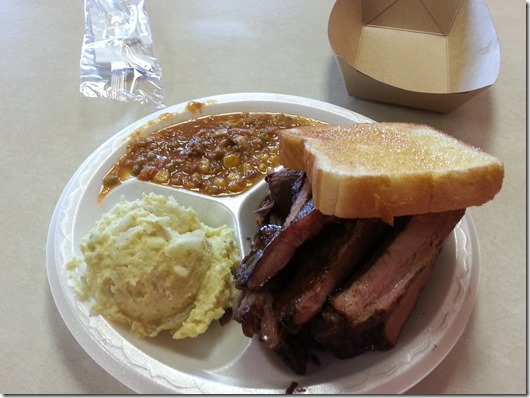 Everything except the potato salad was piping hot.  The stew was flavorful and the corn kernels in it were still crunchy and sweet.  The potato salad had big, tender chunks of potato.

The ribs were meaty and tender, but the winner was the brisket.  Full of flavor, not to much salt, and tender enough to pull apart with a plastic fork.  Of the BBQ I’ve had in Georgia so far, this is the one I’d go back for. 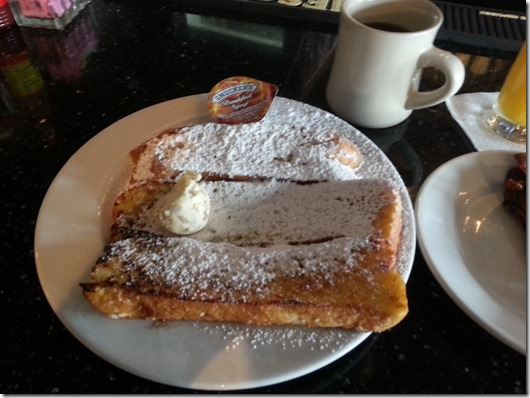 For breakfast I was back at Huey’s for their French Toast with praline butter.  This was an awesome dish – the praline butter with little chunks of pecan made for a wonderful flavor.  But I have to wonder what they’re thinking to serve it with a single-serve, plastic cup, pull-tab lidded, serving of nasty Smucker’s corn-syrup.

I had an interesting surprise when I parked Saturday.  Apparently they don’t enforce the parking fees on weekends.  Not only was it prominently posted, but when I tried to pay (because prominently posted apparently isn’t good enough for me to notice), the machine wouldn’t take my money. 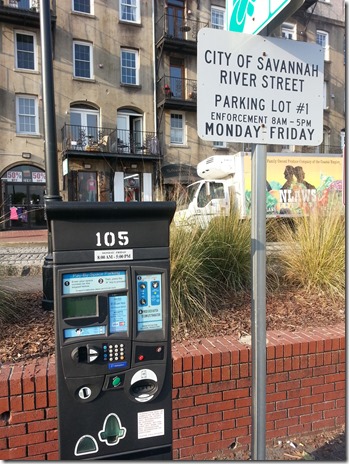 Seems to me the city is missing out on some income by doing this and I’m not sure why they do.  It would make sense to me for them to still charge, even if they don’t have staff to enforce it, and just not tell anyone. 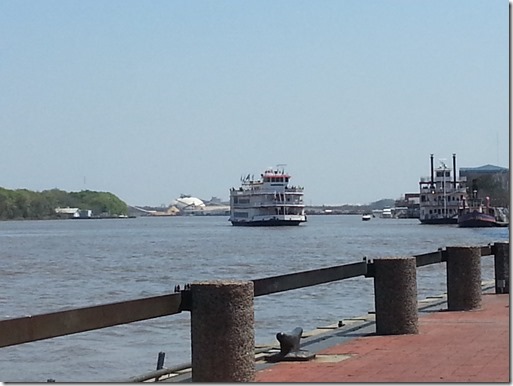 After another walk along the river, I headed away from the waterfront into the city.  I spent some time in the parks, watching birds and people. 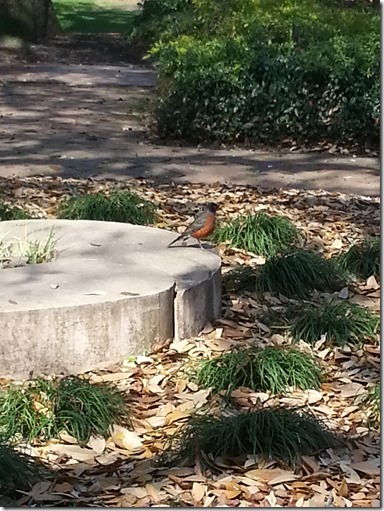 I stopped by to tour the Jepson Center, part of the Telfair Museum.  I was a little disappointed by this museum.  They had a touring exhibit of 16th – 17th century Italian religious art, which was somewhat interesting, but not really my thing.  Other than that, though, and a great silver collection, there wasn’t much in the building.  Possibly they have more at their other buildings, but this was the main, largest, most modern of their locations.

My opinion is that this museum thinks a little too much of itself and not enough of the art.  The building’s big and pretentious (and uncomfortably warm).  They surely used all the wall space they could for the three story list of donors that winds up the central staircase.  I paid to see art, not a list of names.

I’d made a lunch reservation for The Lady & Sons, Paula Deen’s restaurant.  Well, a late lunch, as the only time I could get in was 3:00.

This isn’t the sort of food I’d normally be interested in, southern comfort, but I wanted to eat there at least once.  The Lady & Sons is not fine-dining, the restaurant reflects the food, southern comfort.  It has, possibly, the most friendly staff I’ve ever experienced.

I got the buffet, which consists of fried chicken, baked chicken, short ribs, and a variety of classic southern sides – most of which really aren’t my thing. 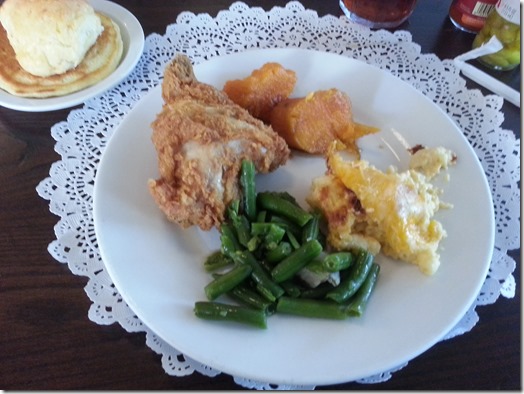 The fried chicken, even sitting in a buffet tray, had a crispy crust and was still very moist.  The green beans were a bit salty for my preferences, but still good.  The sweet potatoes and macaroni and cheese were very good, and those, along with a second piece of fried chicken, sent me back to the buffet.

I also tried fried green tomatoes for the first time, these ordered off the menu. 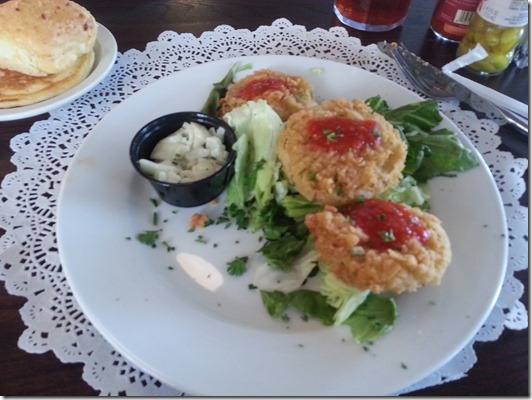 These came with a sweet onion relish and a red pepper sauce.  Pretty good and something I’ll have to try again when I haven’t already tucked in to two plates of fried chicken and sides.

I got a peach cobbler to-go for later that evening, and that ended my weekend.  I headed back to the hotel for an early night and earlier morning to get on the road home.