Once I went to bed in Orlando and I woke up in Atlanta. I have no idea how that happened.–A. J. McLean 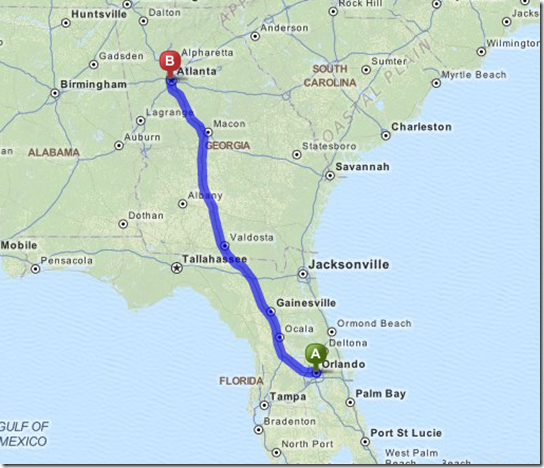 I spent a lot of time and effort trying to go to Tampa this weekend – a couple Lightning games, a Friday of kayaking, and days at the Tampa Ren Faire.  Two weeks I tried every day, but Priceline didn’t cooperate.  Successful bids on 3-star hotels were still running $79 / night on Wednesday (3/13), so I tried some other cities.

Atlanta proved amenable, as I won with my first bid of $50 ($40 + $10 bonus cash) for a 4-star near the airport.  It’s a side-effect of success with Priceline and BiddingForTravel that my first reaction was: “Damn it! I bet I could have gotten that for $36!”

Even if I did overpay a few dollars for the hotel, though, my total travel costs (hotel and gas) wound up being less to drive the 400+ miles to Atlanta than the 90 to Tampa would have been with this weekend’s hotel rates.  So flexibility is good.

I left home around 8:00am for the roughly 7-hour drive to Atlanta.  A bit less than that for me, because I was staying near the airport on the south-side of the city.  Less, at least, to get to the hotel, but my plans for Thursday and Friday nights would take me an hour further north to the suburb of Duluth in Gwinnett County. 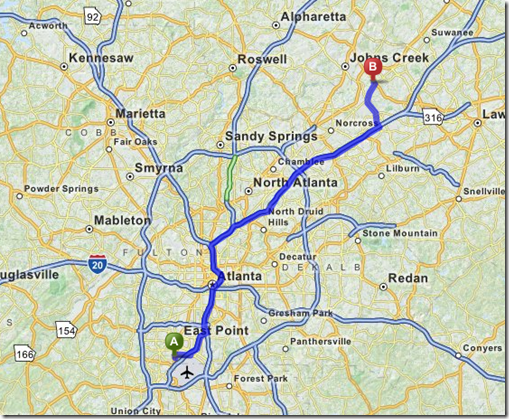 The Westin is just off I85 near the airport and has some nice touches like leaf-shaped soaps. 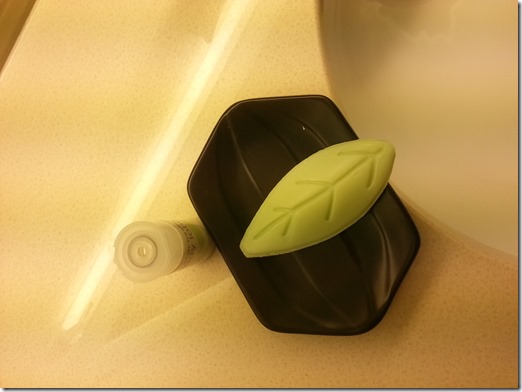 See, this is the sort of little, special touch that makes me feel really, really glad that I didn’t pay full price for the room …

This, on the other hand, might make full-price worth it: 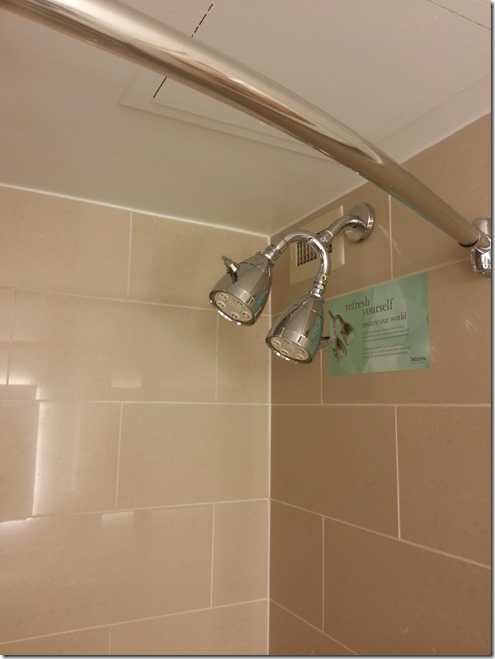 That is the Westin Heavenly™ Shower Head.  I now want one of my very own.

I had just enough time to unpack before getting back on the road to head for Gwinnett County for a hockey game between the Gwinnett Gladiators and the Orlando Solar Bears.  Once I got to the area I used Google Maps to search for BBQ restaurants.

I headed for the closest and wound up at Jim ‘n Nick’s BBQ.  Unfortunately a bit of a chain. 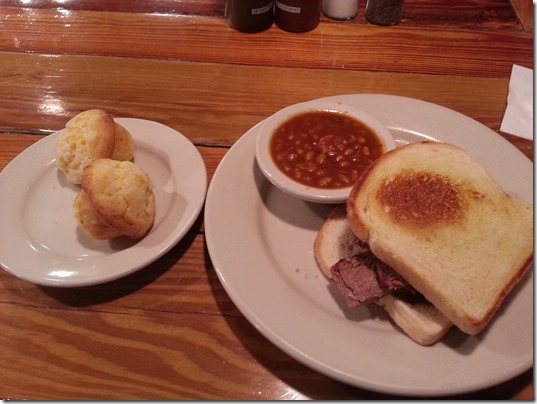 The sweet tea was a bit weak, but this was Georgia and I prefer the teeth-aching brew of South Carolina.  The brisket was pretty good – tender and tasty without being too salty.  They offered the option of sourdough for the brisket sandwich, was a nice change from simple buns.

Jim ‘n Nick’s offers only two sauces.  The regular sauce is pretty good, with a nice balance of sweet and spicy.  The other is a spicier ancho sauce.

The best part of the meal was the little corn muffins, which were really good and made me wish I’d gotten more than two. After dinner I was off to the Gwinnett Arena for the game where I was pleasantly surprised by the lack of a parking fee.  Driving there made clear that Gwinnett County is a fairly affluent suburb of Atlanta and the arena touches showed that, with carpeted walkways and premium food options.

Thursday’s game was all offense, ending with the Solar Bears losing 4-5 and the winning goal being scored only three minutes before the end of the game.  Although I normally sit high in my team’s attack-twice endzone, for away games I like to move around a bit and chose to sit on the glass for this one.

On Friday morning I went to Ria’s Bluebird for breakfast.  The Urbanspoon app has a cool “random” feature, and this is what it picked nearby for breakfast/brunch.

The place had high ratings on Urbanspoon and their chef is apparently competing on Chopped right now, which gave me high hopes that were only raised by the busy parking lot and waitlist at 10:30am on a Friday morning. 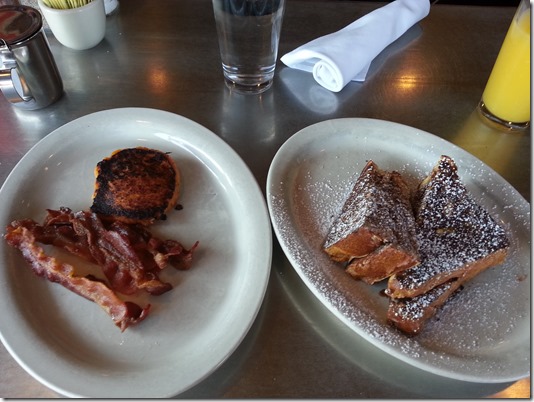 The Nutella cream cheese mixture was pretty good – the cream cheese added some tang that cut the sweetness of the Nutella.  Unfortunately, I wasn’t able to taste much rum in the “Myer rum dipped brioche”.  In fact, I got little flavor from the French Toast itself other than burnt – at first I’d thought it was the batter that made it so dark, but, no, it was simply over-cooked.  As was the otherwise bland sweet potato cake.  Char does add flavor to some foods, not, alas, to French Toast or sweet potato.

I did finish the bacon and orange juice, though.  They were good.

After breakfast I headed for Zoo Atlanta where I watched pandas do what pandas do best. 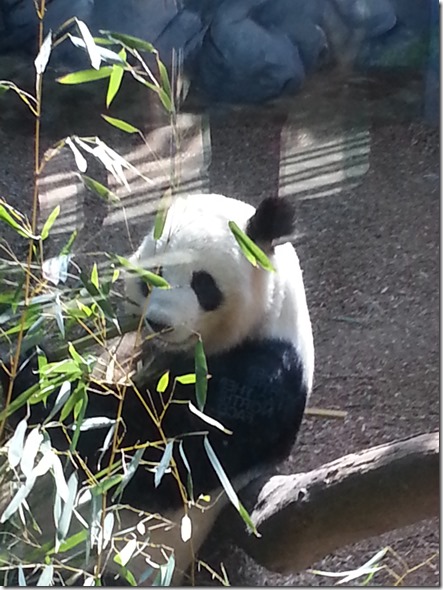 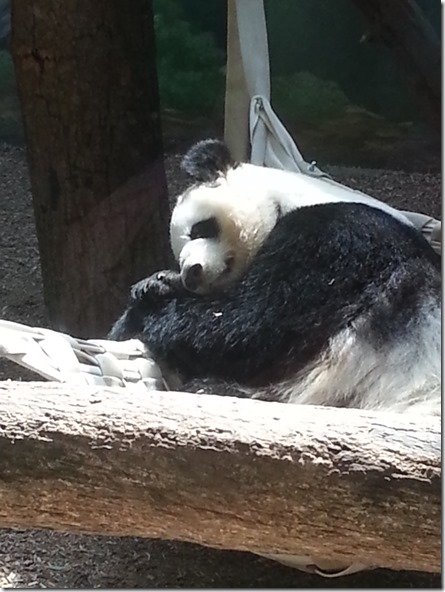 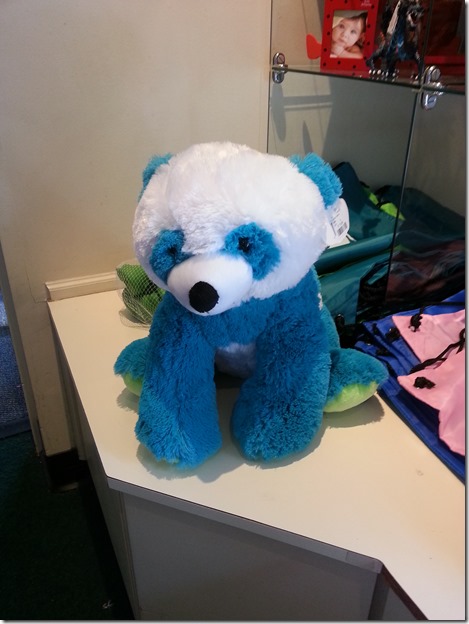 And be unabashedly merchandised.

Also at the zoo, in addition to sleeping pandas, were sleeping warthogs. 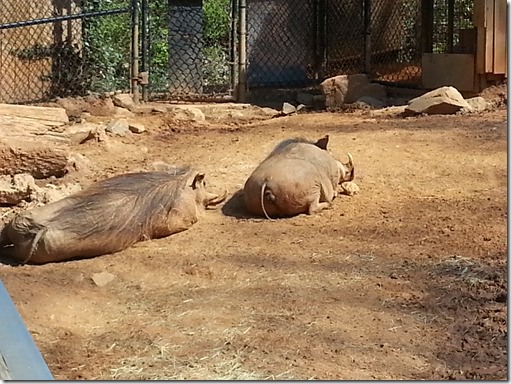 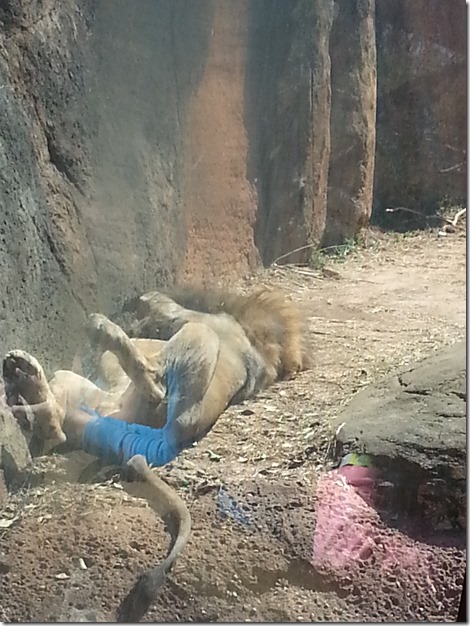 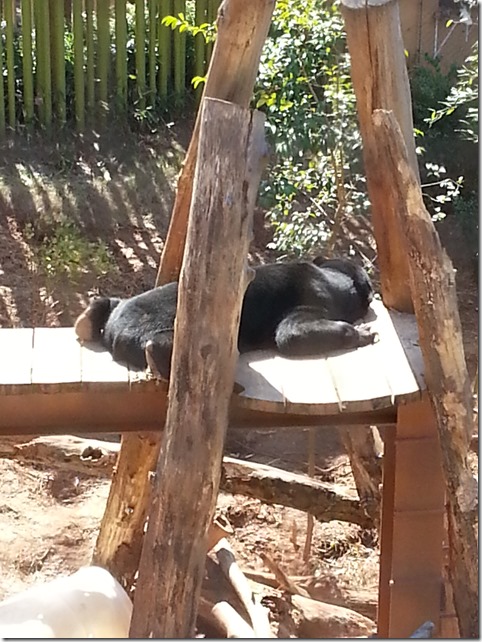 Say what you will about animals in the zoo, but I’ve become more and more convinced that the vast majority of Americans would, should the Aliens ever take over and set up their own amusement parks, be perfectly happy as zoo animals.  Think about it.

By late afternoon it was time to head north to the next hockey game, so I once again used Google Maps to search for a BBQ place near the arena.  The Honey Pig showed up, so I headed there. 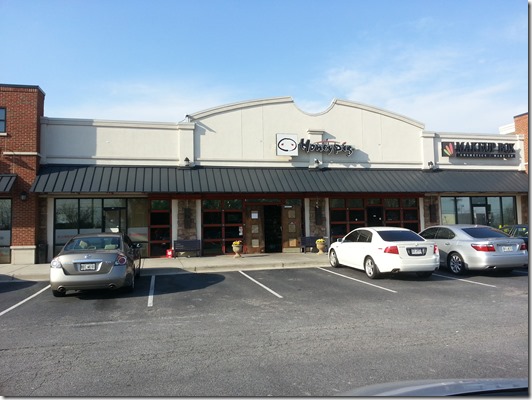 As I parked, I decided that Gwinnett County has no decent BBQ restaurants, since it’s not possible to have good, real BBQ in a building that looks less than a year old.  A real BBQ place should have … let’s call it character.

Good, real BBQ should also not be a Korean place where you cook at the table … which is what The Honey Pig is.  Damn you, Google Maps!

I’d left time for BBQ, which is all precooked, not for raw food to be delivered to my table and cooked by me, so I had to forego The Honey Pig and head for the arena.  So dinner wound up being an arena hamburger … which was actually pretty good.

The Solar Bears lost again, 1-3, so another road trip following the team and seeing no wins.

I planned to spend the entire day downtown, so left my car at the College Park MARTA station and rode the train into Atlanta to the Civic Center station.  I really like trains and subways … I’m not sure why.  I don’t like buses at all, but if I’m in a city with a train, subway, streetcar, whatever, I’ll happily use that for as much of my transportation as I can.  At $10 for the day, it’s a bargain compared to driving and parking in a downtown area.

When I got off the train, I found that I was in the middle of the staging area for the Saint Patrick’s Day parade – including the traditional(?) Llamas of Saint Patrick. 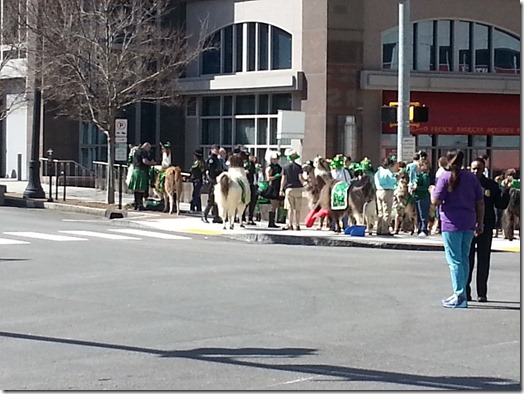 And got to watch the warmup of a traditional Saint Patrick’s Day musical group.

Okay, so drum corps isn’t so Irish, but damn they’re fun to watch.  The wind was heavy and messed up the sound, but they were pretty good.  Right in front of the drum corps was a traditional marching band and I felt sorry them with their tubas, trombones, and pansy-ass flutes.  That can’t compete with some good bass drums and competent snares.

I’d skipped breakfast, because I knew where lunch was going to be. 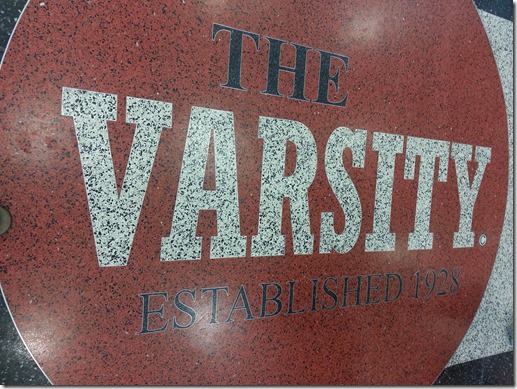 The Varsity’s an institution and proves that burgers and such can be fast, good, and reasonably priced. 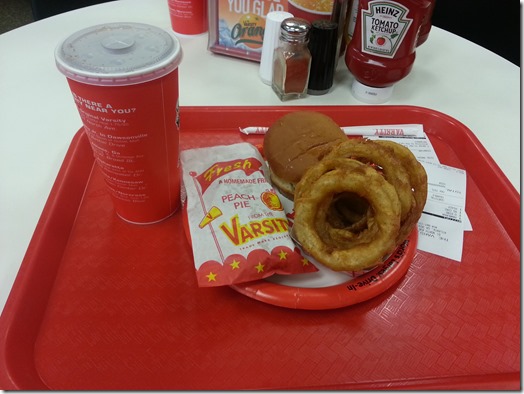 For the cost of a typical “value meal” ($6), I got a good quality burger, handmade onion rings, a drink, and peach pie (fried, as god intended).  This was the best meal of the trip and the cheapest.

I spent the afternoon at the High Museum.  They have a wide-variety of exhibits, ranging from 17th century European to American folk art to African.  All of which is good and interesting, except for the top floor … that’s where they keep … <shudder> … the “modern”.

It’s hard to go from compelling sculpture and intricate furniture pieces.  (I would so furnish my house with baroque … )

I had to go look at the Rodin’s again just to get the stench of that floor out of my eyes.

So after the museum it was time for the evening’s event, which was Much Ado About Nothing at Shakespeare Tavern. 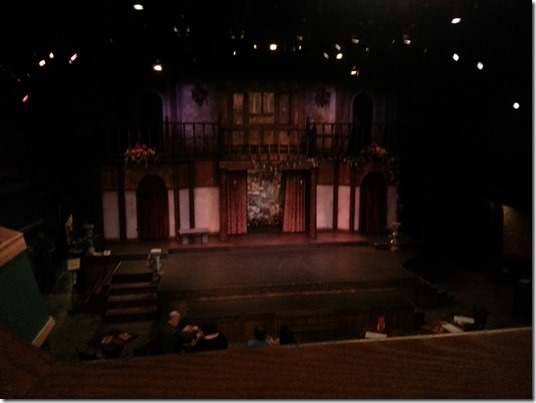 The production was wonderful, which is nothing but what I’d expect of this company.  If you’re in Atlanta and have any interest in live theatre, you should make every effort to attend one of their performances.

After the show it was back on the train for the ride to College Park station and the short drive back to the hotel.

Good trip, all in all, but I really need some good BBQ.