It’s a formula that’s worked for cats, dogs and attempts at English translation – so now, lolSkates.  The difference, though, is that my skating can make you laugh without misspelled captions. 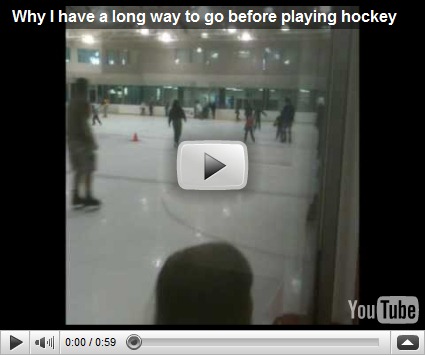 At today’s skate I had the girl-child take some video of me so I could evaluate my backward skating.  My judgment? Well, it seems a lot faster when I’m doing it …

For the record, there was an incident before the video was shot.  I would like to make it completely clear that I did not fall down – no matter what the girl-child claims.  Here’s what happened:

Early in the session the hockey-game-in-my-head took a turn against us.  We turned the puck over in the offensive zone and I had to hustle to the blue line as one of the opposing forwards-in-my-head had the puck and an open sheet of ice all the way to our goal (which was in my head, as well, since they don’t put the actual nets out during public skating).

I got to the blue line ahead of him and started to turn to block his progress when he clearly began a pass to the opposing center-in-my-head.  Since the rest of my team-in-my-head was tied up deep in the offensive zone, this would be very bad and result in three-on-one rush, since their other winger-in-my-head was free as well.

So, bravely sacrificing my body for the team-in-my-head, I dove to the ice, making a spectacular pokecheck with the stick-in-my-head and directing the puck-in-my-head back deep into the offensive zone where my teammate-in-my-head took it and immediately scored.

This is how I wound up sprawled facedown on the ice at the blueline.

I did not fall.

This is not the first blatantly false accusation the girl-child has made about me, either.  Just yester day, she accused me of falling out of my kayak.  Brat.