For my birthday morning, I took my daughter and a friend of hers to Haulover Canal.

After a long drive to pick up her Little Boy Friend*, we hit Subway for breakfast and to pick up lunch.  At Subway, they gave me a Sharpie to put our initials on the lunch sandwiches, which, of course gave me the opportunity to write LBF on her friend’s – he seemed to have a sense of humor about it, she erupted in a chorus of “I can’t believe you did that!”

Kayaking and annoying the girl-child … life is good. 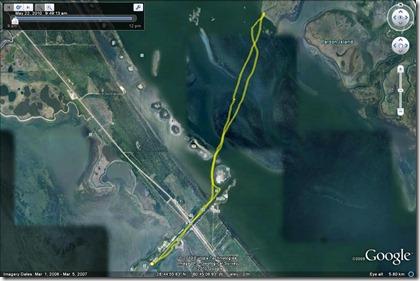 I put the kids in a tandem Pamlico while I paddled my Tarpon. 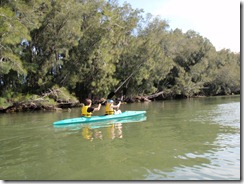 Shortly into the paddle, we spotted the first dolphin of the day. 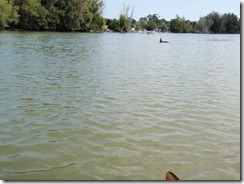 And shortly after that, the manatees. 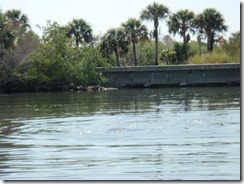 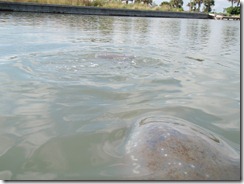 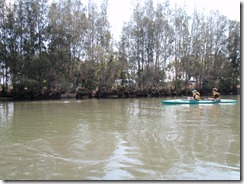 We left the manatees and the kids did a little exploring of Haulover’s unique shoreline. 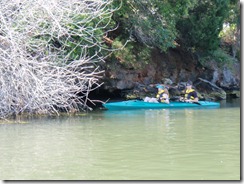 Shortly after this picture, they drifted closer to the branches and I heard the girl-child express her concern that a snake might drop on her. (You may express your ridicule in the blog comments and I’ll make sure she gets them.)

Under the bridge and past the manatee observation deck, there was a pair … sporting. 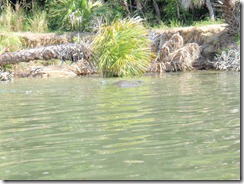 Some conversation in the other boat about what they were doing prompted the girl-child to ask me what I thought:

“Well, sweetheart, when a mommy manatee and a daddy manatee love each other very much …”

“So you think they’re having sex too.”

A short way further along I spotted an alligator near the bank, but he sank out of sight before I could get a picture.

We exited the canal to the North – here are the mangroves where I stopped us to tell the kids the Mangrove Story. 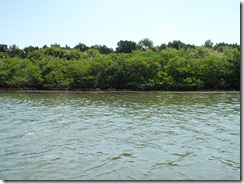 What’s the Mangrove Story?  Well, I believe that we should take advantage of opportunities to educate children:

“Mangroves are very important to the coastal eco-system, because their roots provide a protected environment that acts as a nursery for many different species of fish, crabs and shrimp.

“Interestingly, if you take a 10’x10’ piece of nylon netting and some lead weights and use them to submerge a body amongst the roots … in two weeks it’ll be nothing but bones from all those little baby fishes and crabs.

“You should remember that as you spend time hanging out with my little girl.”**

The kid seemed to be a good sport about this story, too, because, of course and on advice of counsel, the Mangrove Story is just friendly kidding.

Just before heading out into the lagoon, we came across a barnacle-covered piece of driftwood. 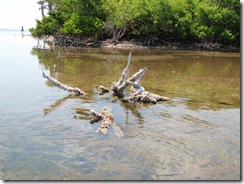 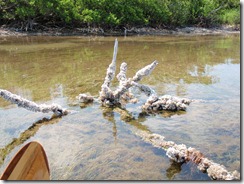 The wind was out of the NE today, so we headed in that direction, crossing the lagoon before stopping to drift back as we ate lunch. 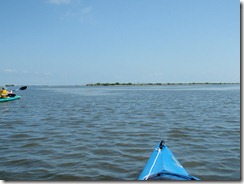 After lunch, on the way back, the girl-child will claim I fell in the water.  I deny this charge.  Here’s what happened:

Because I had forgotten to bring towels, I was unable to improvise a ass-pad seat cushion as I have recently.  After the paddle across the lagoon, the lack was being felt, so I stood up to stretch my legs.

The Tarpon is a very stable boat, so standing up is not foolish.  I’ve stood in it to fish before with no problems on calm water, and it was quite calm today.

From my standing position I was enjoying the view of the clear, shallow water when I spotted what I thought was a small turtle.  A second look showed that it was a large crab and since the water was so shallow and clear, I wanted to get a good picture of it, so I quickly sat down.

Standing in the Tarpon is perfectly okay … sitting quickly, not so much.

So, yes, part of me left the boat, but since it was only one leg and became wet only to the knee, while the other leg and the rest of me stayed in the boat, I do not believe this qualifies as falling out.

I subscribe to the philosophy that any exit in which my hair remains dry qualifies as a controlled-exit from the watercraft.

I did not get a picture of the crab.

After that incident, though, I did get a picture of a pelican in flight. 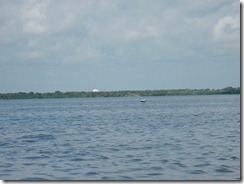 We also saw the second dolphin of the day off in the distance.

On the way back, the kids took a disturbingly close look at the mangroves. 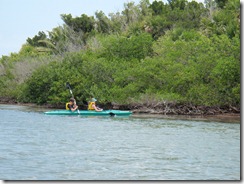 Of course I actually use a far more remote patch of mangroves there was nothing out of the ordinary for them to see.

Back through the canal, now much more crowded with fishermen, and saw the third dolphin of the day off-shore as we loaded the car – or, more probably, saw the first one of the day again, but still good to see.

* I call all of the girl-child’s female friends her Little Friend and the males are referred to as her Little Boy Friend.  I do this for two reasons: first, it saves me the trouble of trying to remember names; and, B, it annoys her to no-end.  Yes, I’m lazy and cruel.

** The Mangrove Story is intended solely as an amusing anecdote and does not constitute an admission of guilt or any knowledge whatsoever about missing teenage boys who’ve hung out with my daughter.